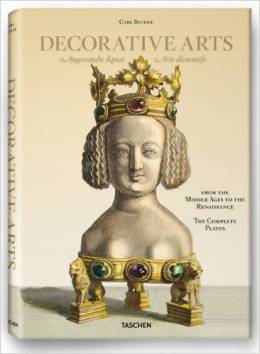 This title features ten centuries of European applied arts. When "Kunst und Gerathschaften des Mittelalters und der Renaissance" (1852-1863) was published, what purchasers in fact bought was a small printed museum of unusual treasures. With 216 hand-colored copperplate engravings, the three-volume publication gives a comprehensive overview of applied arts in Europe from the 6th to the 16th centuries. The objects presented comprise furniture, metalwork, jewelry, costumes, tapestries, and works of bookbinding. Carefully selected masterpieces like the gilt Corvinus goblet, an enamelled saltcellar, and medieval ivory combs are depicted, along with a decorative sword, now lost. Carl Becker (1794-1859) was head of the Royal Cabinet of Prints and Drawings in Munich and later director of the Bavarian National Museum. His work helped influence the creation of new museums of art and design - the South Kensington Museum in London (today the Victoria and Albert Museum), founded in 1852, being the very first - in which artists could study the hand-crafted masterpieces of earlier epochs. Although Becker commissioned various artists to make drawings of the historical originals for Kunstwerke und Gerathschaften, the signatures on the plates show that most of the illustrations stem from the hand of artist Jakob Heinrich von Hefner-Alteneck (1811-1903) and he can therefore be considered as the work's main draughtsman; considering that Becker died before the completion of the work, the most influential figure behind it was undoubtedly Hefner-Alteneck. Before his collaboration with Becker, Hefner-Alteneck had previously published "Trachten des christlichen Mittelalters" ("Costumes of the Christian Middle Ages"). With their publication, Jakob Heinrich von Hefner-Alteneck and Carl Becker gave expression to the 19th century's revived interest in the art of the Middle Ages and the Renaissance. By selecting masterpieces from public and private collections, and reproducing them faithfully in pictures, they created a document of artistic quality in itself, which also provides evidence of works which have since been lost. With this new edition, which includes a commentary, TASCHEN is making an important publication accessible once more, giving a glimpse of the treasure chambers of the Middle Ages and the Renaissance. This complete reprint was created on the basis of an original copy in the "Wurttembergische Landesbibliothek" in Stuttgart.