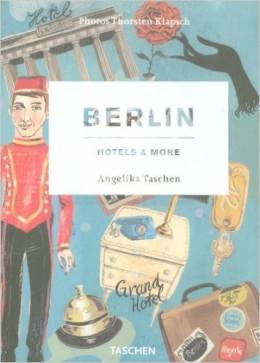 Melting pot metropolis Glamorous in the Roaring Twenties, destroyed during World War II and divided afterwards, rebuilt in the 1950s, and now reunited, Berlin is a city of vibrant contrasts where diverse cultures form a multihued urban fabric. Derelict former Communist neighborhoods have been reincarnated as haunts for artists and designers while elsewhere the city's old traditions are also still very much alive. Places Angelika Taschen recommends you stay while visiting Berlin include everything from classic hotels like Regent Schlosshotel, bed and breakfast-style pensions such as N?rnberger Eck and Askanischer Hof in Charlottenburg, or the serviced apartments Lux 11 in Berlin-Mitte. And of course none of the hotel books would be complete without a copious helping of hotspots to visit and places at which to eat and drink during your stay. Favorite recommendations for Berlin: include Ludwig Mies van der Rohe's New National Gallery, the Helmut Newton Foundation, a curry wurst stand in Prenzlauerberg where Berlin's signature dish was invented and a ballroom nearly a century old. About the series: Angelika Taschen's Hotel series books are much more than simple hotel guides. They are meant to be taken along on your trip, as they not only feature the best and most interesting places to stay ?from low budget to luxury ? but also list hot spots for each hotel's neighborhood. Once you?re installed in the hotel of your choice, you can peruse our suggestions for restaurants, bars, boutiques, specialty shops, and more.