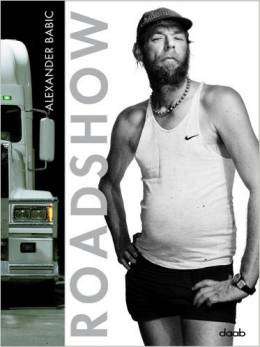 It is the authenticity of the images which fascinates us rather than the reality that lies behind them. This reality seems rough and dangerous and all but worth emulating or aspiring to. The photographer Alexander Babic covered thousands of miles by car in Australia and South Africa in order to capture a scenery of which he himself was part - a real adventure. He drove along the world's longest highways, encountered the world's longest road trains, i.e. the Australian road trains with up to four, sometimes five trailers measuring up to 70 metres in length. He set up a complete mobile studio and asked his models, the truckers, if he can take a picture of them. He wants in his own words: "to capture faces that reflect stories, experiences, even tradegy and roughness in a totally classic and unadorned manner in black and white photographs". The portraits of the subjects are countered by similarly impressive views of the vehicles, from the front an this time in colour. The double page landscape photographs interjecting the series are just as impressive and suggest the publication be seen as a holistic composition ad be " read" as such.