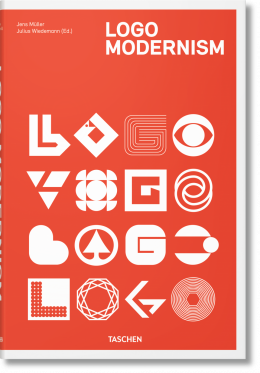 Modernist aesthetics in architecture, art, and product design are familiar to many. In soaring glass structures or minimalist canvases, we recognize a time of vast technological advance which affirmed the power of human beings to reshape their environment and to break, radically, from the conventions or constraints of the past. Less well-known, but no less fascinating, is the distillation of modernism in graphic design.

This unprecedented TASCHEN publication, authored by Jens Müller, brings together approximately 6,000 trademarks, focused on the period 1940–1980, to examine how modernist attitudes and imperatives gave birth to corporate identity. Ranging from media outfits to retail giants, airlines to art galleries, the sweeping survey is organized into three design-orientated chapters: Geometric, Effect, and Typographic. Each chapter is then sub-divided into form and style led sections such as alphabet, overlay, dots and squares.

Alongside the comprehensive catalog, the book features an introduction from Jens Müller on the history of logos, and an essay by R. Roger Remington on modernism and graphic design. Eight designer profiles and eight instructive case studies are also included, with a detailed look at the life and work of such luminaries as Paul Rand, Yusaku Kamekura, and Anton Stankowski, and at such significant projects as Fiat, The Daiei Inc., and the Mexico Olympic Games of 1968. An unrivaled resource for graphic designers, advertisers, and branding specialists, Logo Modernism is equally fascinating to anyone interested in social, cultural, and corporate history, and in the sheer persuasive power of image and form.

Jens Müller was born in Koblenz, Germany, in 1982 and studied graphic design. Recipient of numerous national and international design awards, Müller is Creative Director of Optik design studio in Düsseldorf, editor of the A5 book series on graphic design history, and author of Logo Modernism. He is a visiting lecturer at the Peter Behrens School of Arts in Düsseldorf and at the design department of the Dortmund University of Applied Sciences and Arts.

R. Roger Remington is Vignelli Distinguished Professor of Design at the Vignelli Center for Design Studies, Rochester Institute of Technology, New York. He has lectured and written extensively on the history of graphic design, including Nine Pioneers in American Graphic Design and Design and Science: The Life and Work of Will Burtin and has been reocgnized by the RIT Eisenhart Award for Outstanding Teaching and the Trustees Lifetime Achievement Award for Scholarship in Graphic Design.