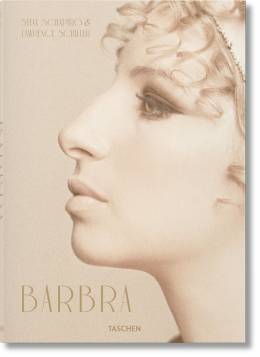 In 1970 Barbra Streisand published a story in Life magazine titled “Who Am I Anyway?” It was the very question two leading photojournalists of the day—Steve Schapiro and Lawrence Schiller—were also asking as they photographed her during her first five years in Hollywood, working to get beneath the veneer and capture “the real Barbra.”

Brimming with photographs, stories, and behind-the-scenes shots from Schapiro and Schiller, and previously available only as a limited edition,this is a must-have collection for any Streisand fan. All the best movies of Streisand’s first Hollywood decade are here: Funny Girl, On a Clear Day You Can See Forever, The Way We Were, The Owl and the Pussycat, Up the Sandbox, Funny Lady, and A Star Is Born. So too are her loves, directors, confidants, and costars: Elliott Gould, William Wyler, Sydney Pollack, Vincente Minnelli, Cis Corman, Omar Sharif, Kris Kristofferson, and, of course, Robert Redford.

Through it all a picture emerges not of a singer who could act, but of an actress who could sing, write, direct, dance, and do just about anything she put her mind to.