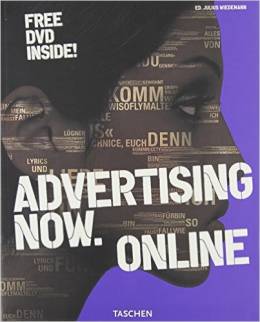 Ads in cyberspace: the best campaigns on the web today This second installment in TASCHEN's advertising series joins Advertising Now! Print and the forthcoming Advertising Now! Films to provide a complete study of commercial communication in the world today. Divided into chapters by subject (from food and beverage to electronics, clothing, and more), this tome examines the most effective and important online ad campaigns by exploring the work of the globe's top award-winning agencies, including DM9, Tribal DDB, OgilvyOne, LOWE Tesch, and 2020 London. With each chapter containing an article from one of the agencies, you?ll learn not only what the biggest campaigns are, but also what it takes to create them. From Nike to Coca Cola, FIFA, and the WWF, these are the ads that are defining the face of online advertising. The book will come with a DVD featuring the navigation of most of campaigns as well as interviews with creative directors and films produced for the internet. The editor: Julius Wiedemann was born and raised in Brazil. After studying graphic design and marketing, he moved to Japan, where he worked in Tokyo as art editor for digital and design magazines. Since joining TASCHEN in Cologne, he has been building up TASCHEN's digital and media collection with titles such as Animation Now!, Web Design: Best Studios, and TASCHEN's 1000 Favorite Websites..